Exercise 1  The structure of the human body  work in sketchbooks

I looked at a a painting Picasso made in 1910 of Ambroise Vollard and a graphite drawing of the same person 5 years later.  In the 1910 painting Picasso is immersed in his formulation of Cubism – seeking cones, spheres and other geometric forms that underlie the natural appearances.  The graphite drawing is in a conventional representational style.

On the Momo website I found a series of 4 drawings (etches were made) Picasso did of Vollard – he completed it in a single day in 1937.  (Gallery label from Picasso: Variations and Themes, March 28–September 30, 2010)

In these etchings one can admire the use of line.

Exercise 2  Three figure drawings – use different tools, materials and supports. Work on A2 or A1 size and spend between half and one hour on each of the 3 drawings

I used a charcoal drawing I did in a figure drawing session and applied acrylic burn umber with a scraper over the drawing. I then did a drawing with pastels onto it, in order to give form and structure to the quick underdrawing.

I did a drawing in my sketchbook whilst looking at the video of an OCA tutor on drawing a lounging figure.

I decided to work loose and draw a figure sitting on a couch.  I started off with a charcoal sketch, added ink and then decide to wash it with acrylic ( quinagruidine) I added more charcoal and pastel to the drawing. 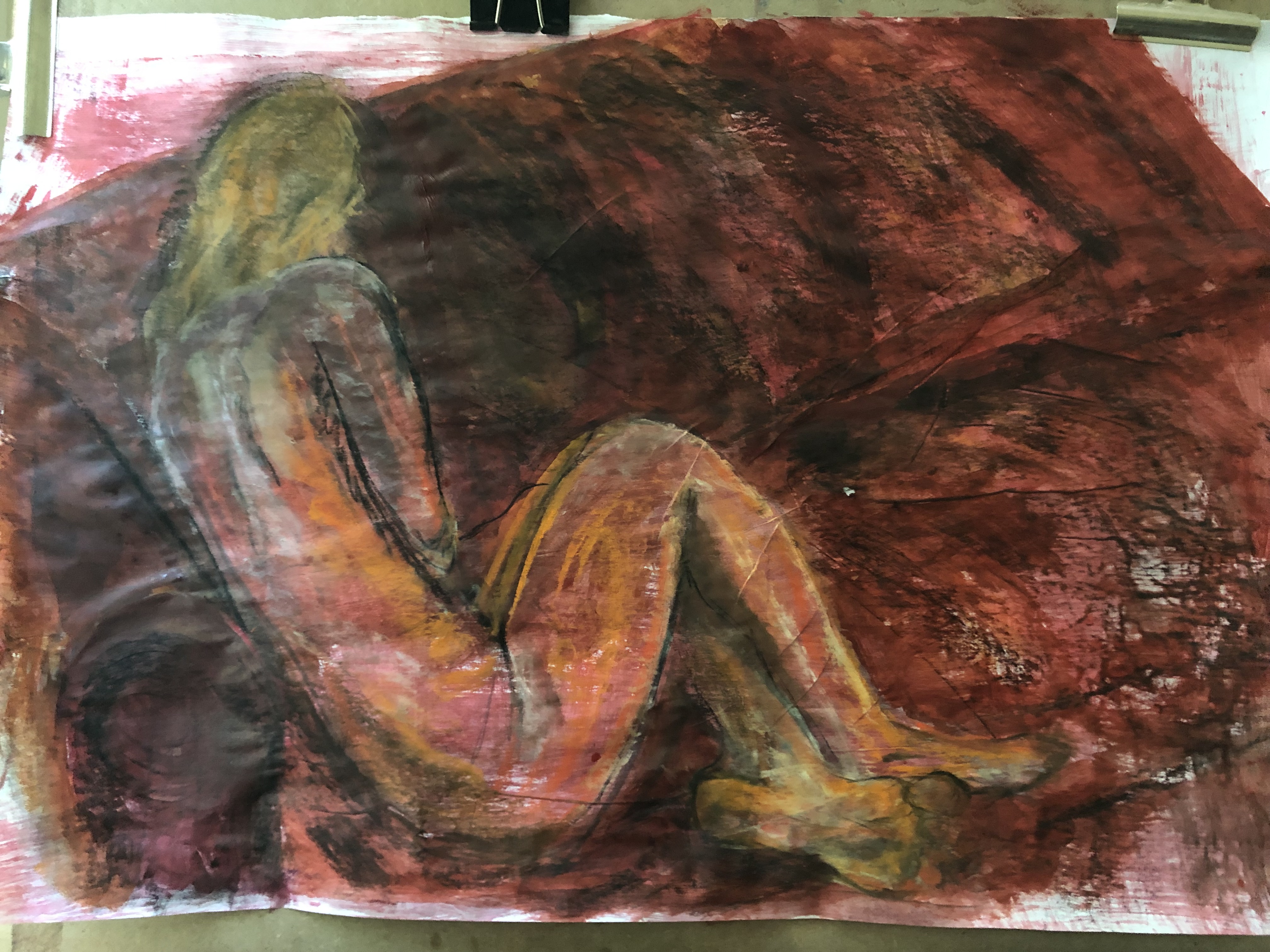 ( My tutor suggested I look at this experiment again – the faded head and my idea of my own ageing process. 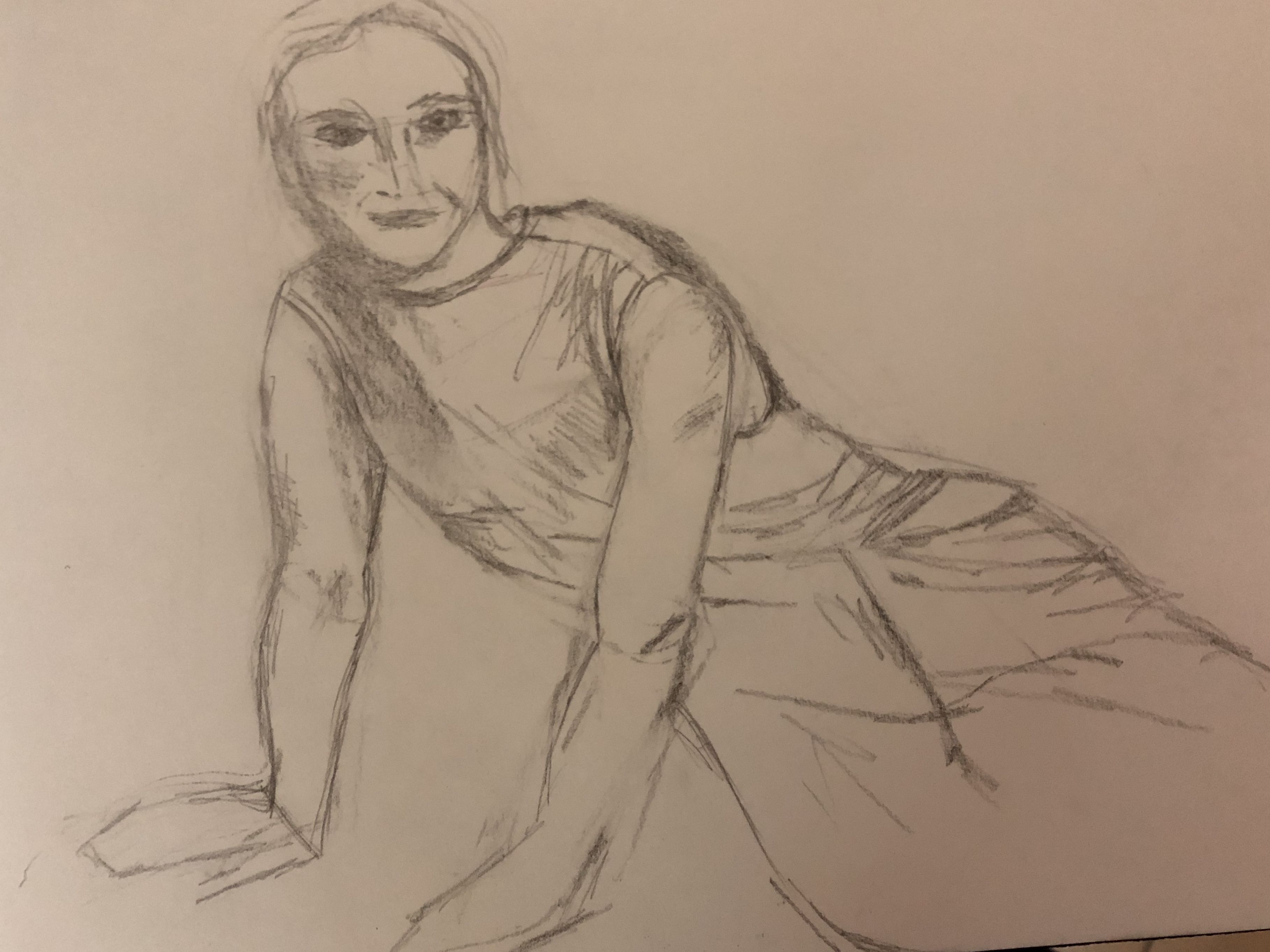 My lounging figure is from the same model (seated) in this exercise) I started with a small 9 A4) pencil drawing then did the final drawing with Derwent charcoal blocks ( black and white)  and focussed on the lines and form.

The pencil sketch was softened with a paper stump and then I first used white ink, which could not show, I then used black ink and dipping pen. I tried to water down the ink for shadows and tonal effect – think this is something to explore more.

This was a longer drawing.

I did the same drawing on a bigger sheet of newsprint paper, using charcoal.

I had the opportunity to do a tutored figure drawing class in Pretoria, South Africa (June 2018) – this is great, as I have not been drawing figures for the last few months.  I started with short drawings and then worked on big sized paper. The drawings varied from 1 min poses, to 20 minutes, except for the last, longer drawing.  I took photos of the model (seated)  to do extra work at home, as I new my drawings should show other materials and I also felt I could push the initial drawings by experimenting further.  The short poses was really difficult – took time to get use to drawing and looking for gesture.  I find it takes time for me to integrate the pose I see as well as the beauty in the model I would like to represent.  I see the sketches as studies which could develop further – if the opportunity arises to work regularly with a model.  I realise the value of keeping sketchbooks of these drawings and will try to keep this practice up.

I enjoyed the seated model drawing as it felt as though I was sculpting the body with the pastels overlaying the initial charcoal drawing.  The first drawing of the lounging model was hard to to, but as I started a self portrait with my face looking upwards and have not been happy with my attempts, I felt I should at least try.   This is the rough drawing – short pose of 20 minutes on newspaper print., which I considered to through away – hence the state of the drawing.  I have given up on achieving anything better in this case.  I think I was so focussed on getting the technical things, like foreshortening in place, that the enjoyment of drawing what I actually see was lost on me.  The lounging model, 2nd drawing was easier to do and I did a pencil drawing to start with and found the pose easier to represent.  I did however made her back too long.

The drawings I did in the October group session in Dubai was added due to the fact that I considered focussing on finding basic form and then working on the actual drawing – I used lines to mark the shape of the figure, although this is not a good view.  It shows more foreshortening and bending of the body.  I prefer drawing on bigger paper – I feel I get uptight and concerned with detail, rather than finding the basic structure of the object/figure.  I find it takes time to relax and draw with ease – I still use to dark lines in the beginning and the softer charcoal helps me to use my fingers to soften and find gesture in the form of the figure. 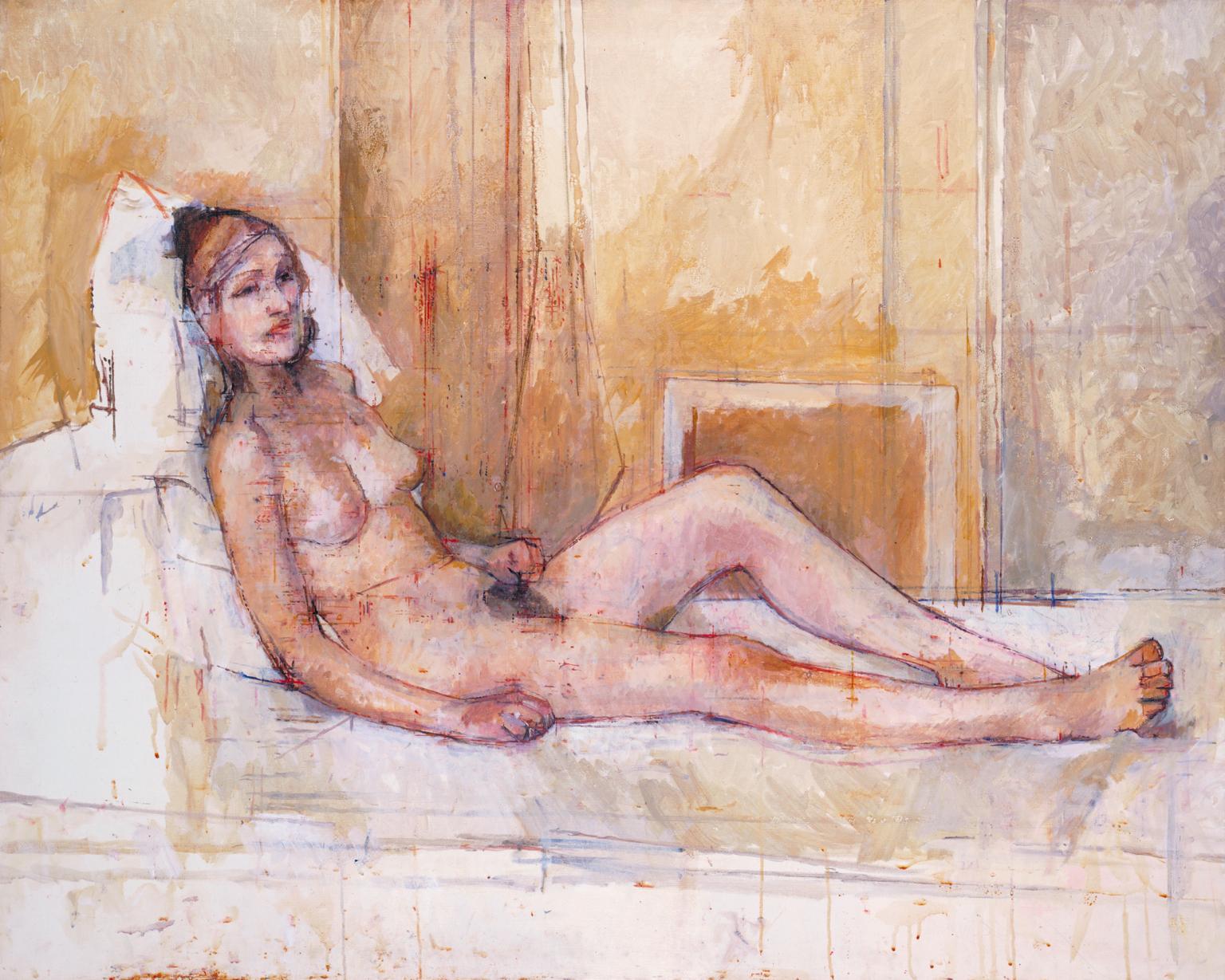